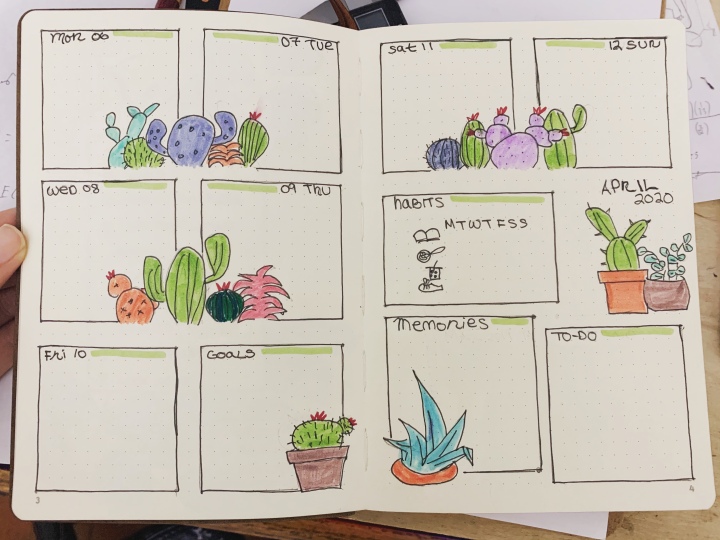 Bullet journaling is something I’ve wanted to get into for a while now. The concept is simple: You have a notebook full of dotted pages. This means you are not confined by the left-right, top-down format of a regular lined notebook.

I first discovered bullet journaling on accident, a while back when I was shopping for a new meeting notebook (lab notebooks are just tacky to bring into a conference room). I bought a beautiful soft green leather notebook and didn’t realize until I got home that the pages were actually dotted instead of lined. At first I was annoyed, but it’s kinda a dick move to return an item when the accident purchase was my fault. Plus, the green cover was pretty, so I decided to roll with it. I ended up falling in love with the freedom afforded to me by the dotted pages–I could draw diagrams of any shape without having lines running through them, but at the same time, unlike with a blank-page notebook, I could follow the dots and write in a straight line. However, I didn’t consider myself a “real” bullet journaler. I stuck washi tape in my journal and got a lot of ooohs and aaahs from passerby (perks of an aisle desk), but for the most part, I just scribbled down meeting notes in top-down fashion. Just your standard “square, vanilla” notebook usage.

But I was intrigued by the little post-card that came with my new journal, which claimed the new technique of “bullet journaling” could increase organization and productiveness. As someone who operates on the fly and isn’t very organized, I wanted to try it then, but I didn’t think I had the time to learn all the layouts and invest in artwork (you don’t NEED artwork to have an effective bullet journal, but I’m extra).

Now that I’m stuck at home in quarantine and finding it hard to stay motivated, it seemed like the perfect time to take a shot. So I ordered some supplies off the internet: a set of colored pens, a set of pastel highlighters, a case to contain said pens, and a leather bullet journal. They arrived yesterday, and I took the plunge.

Now, I’m a deer-in-the-headlights-planner sort of pantser. I plan a little bit ahead at any given time, but not very much ahead. So I chose to build my journal around the Weekly Spread. A Weekly Spread is exactly what it sounds like, a planner spread designed to organize just one week at a time.

Monthly Spreads would chronicle the entire month, while Daily Spreads would break down a single day, usually by the hour. I didn’t feel like a Monthly Spread would give me enough room to write down everything I want to note (plus I would have to think a month ahead, and that’s a little bit scary), but at the same time, I want to get on with my day instead of spending so much time around planning it. So the Weekly Spread feels perfect to me.

After blocking out each of the day of the week, I had some space left, so I decided to track a few other things. I’ll probably vary what I track every week to begin with, until I figure out what works for me.

This week, I decided to track:

Goals: My goals this week are to sleep earlier (before I completely regress back to my college routine of going to bed at 3 a.m. and getting up at noon), finish my first critique for a workshop I’m attending this summer The Never-Ending Odyssey, and write 5,000 words of my novel.

My habits: I wanna get an idea of how many days a week I read, cook (I hate cooking but I’m doing my best to limit how much I get delivery), consume boba (I’m a boba addict who unfortunately realized you can order 3 bubble teas in the same delivery and store them in the fridge to last multiple days), and exercise.

Memories: How else will I remember that this week, Luna has tried every day to eat Valle’s work plant (that is–plant that is part of an experiment for Valle’s work as a biologist)?

To-Do: General to-do things with no hard deadline, like return an Amazon package or mail back my corrected 2019 tax return (I forgot to sign it….yes I know…..).

I also made a “key”, to keep track of what my symbols mean. As you can see, I made my eucalyptus-themed key first using colored pencil and dark blue marker, and it doesn’t look nearly as nice as my Weekly Spread, which I did in pastel highlighter and black pen. The highlighter has a soft, watercolor effect, which I’m really digging. Regarding the blue marker, I know that blue clashes with green…I just accidentally thought it was black XP. Lesson learned.

I’ll probably make a Cover page for every month as well (I have a succulent one planned for April), but I have to divert my attention to some other projects for now, so maybe next week.

Other tbd ideas: I would also like to make a layout to organize my writing critiques. More on this next week after I play around a bit with different layouts. Another cool page would be a mood tracker for the entire year–but on one page (although 2020 is probably a bad year to start with).

So far this is the only activity I’ve tried in quarantine that has allowed me to relax! The creativity of designing my own planner layouts negates the tedium of managing my time. Let’s see if I can manage to keep this up.